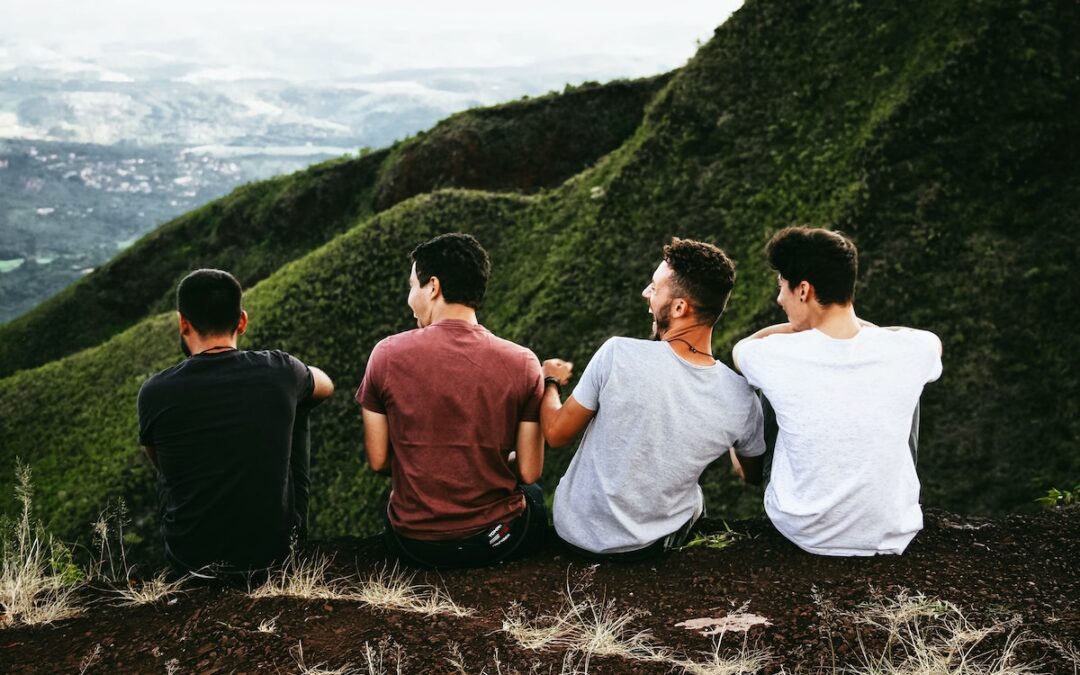 According to the organisers, International Men’s Day is a day to celebrate the value men bring to the world, their families, and communities.

So if you have a man in your life, please let him know how much he means to you today.

In the meantime, International Men’s Day has got me thinking about how we see the differences between men and women.

For those of us in straight relationships, building a life with someone of the opposite sex, those differences can sometimes feel… stark.

In fact, I for one have days when I wonder whether the whole concept of heterosexual love might be deeply flawed!

But on my better days I can see the beauty in the endeavour.

I can see all the things that first attracted me to him, and all the potential for growth that our differences provide.

(LGTBQ relationships provide all of the same opportunities of course, but as it’s International Men’s Day and lots of you are, like me, in straight relationships, that’s what I’m thinking about today.)

The Differences Between Men and Women

Here are some of the typical things I hear from frustrated partners:

Some of these kinds of differences are down to each person’s unique personality, of course.

But many are rooted in the gendered expectations we all grew up with.

Our culture has quite strictly defined but often unspoken guidelines around masculinity and femininity.

And we’re exposed to these everywhere, right from birth.

Generally speaking, boys are encouraged to be spontaneous, take risks, repress their emotions, and think of themselves as logical.

Girls get encouraged to plan and organise things, be careful, and for the most part feel freer to express their emotions (although they’re seen as lesser for doing so, which we’ll come back to).

And then there are the couples who relate to each other in ways which run opposite to the typical gender dynamic (for example when he seeks togetherness when under stress and she seeks space) and this can cause real feelings of alienation.

It can feel harder to get the support we need from friends and family when we feel like we’re different, and maybe others won’t understand.

The good news is that however different you are to your partner, those differences can actually be your strengths as a couple, as long as you respect and value them and each other.

Why You And Your Partner Are So Different

I often work with couples who come to me feeling like they’re so different, maybe they’re just not compatible.

(I know I’ve thought this in my own relationship.)

But the differences between you and your partner are no accident. We’re often attracted to people who are unlike us in some key ways – people who have become the things that we have not.

So a person who likes to plan everything is attracted to someone more spontaneous, and vice versa.

This is because in some ways a couple functions as a complete whole.

Together you can both benefit from the other’s ways of being – like having a lot of fun together, but also putting some money in savings.

The Challenge Of Differences When Stress Hits

Over time – and especially when we go through stressful periods, like starting a family or living through a global pandemic – those differences that appealed to us can start to annoy us.

We all become more extreme versions of ourselves when we’re under stress, which can make us feel irritated or even threatened by someone who is manifesting opposite qualities.

“Why does he think it’s OK to spend so much at a time like this?”

“How does she think we’ll get through a time like this without letting loose a little?”

You’ll feel better about the differences between you when you remember that you don’t just complement each other, you provide a helpful balance, to each other and to your children.

But you can only enjoy this when you respect and value your partner’s ways of being.

That means remembering what first attracted you to each other, and looking for the positives in your partner’s approach, especially in how they might balance out your own.

So the happiest couples work to meet in the middle, and this often leads to them gradually becoming more alike.

As it’s International Men’s Day, let’s look at whether we’re seeing this happening in the culture at large, too.

How Women’s and Men’s Lives Have Changed

Women’s lives across much of the world have improved massively over the last hundred years.

Each generation has enjoyed more political, economic, and social rights and freedoms.

It is, of course, frustratingly slow at times.

I was brought back down to earth recently when I excitedly told my eight-year-old daughter that the US had elected both the first black person and the first woman to the role of vice president and she was horrified.

“What? They’ve only just done that?! Were they not allowed before now or they just didn’t?!”

So it’s slow, but it is happening.

Women in our culture can now take for granted that they can get an education, play sports, wear trousers, earn money and keep it, vote, get elected, run businesses, control their fertility, and talk openly about their sex lives.

In the same hundred years, men’s lives have changed much less.

This is of course because they already had those rights.

But the fact men had more rights doesn’t mean their lives were – or are – much less restricted by traditional gender roles.

Women have being doing all the things that were previously seen as just for men.

But men haven’t started doing the things that are thought of as just for women to the same extent.

Why? Because they’re still seen as lesser.

“Talking about your problems, being honest about your emotions, having a tightly bonded peer group with whom you can discuss your hopes and fears, being able to reinvent yourself day after day, feeling united in a common, hopeful aim, being desired, rejoicing in beautiful things – these are all seen as ‘female things’.

And these are the things men say are missing from their lives.

The answer, I’m afraid, is awful: it’s because female things are, still, seen as ‘lesser’.

It was understood why women wanted the men’s things – they are the things of power.

We took them, and we grew in stature.

But if men wanted to take women’s things – crying, and hugging, and flowers, and community, and emotional self-improvement, and gardening, and beautiful textiles, and looking sexy – they would be seen to be taking the soft things.

The ‘losing’ things. The things of the inferior gender. Things that are seen to have no power – and are, therefore, second-rate, or consolation prizes.”

What Can We Learn From Each Other This International Men’s Day?

For both men and women to be free to enjoy the full range of human experience requires the same approach that leads to satisfying relationships with our life partners.

Sometimes meeting in the middle means letting ourselves be freer to become more alike over time.

That means acknowledging when we think of something as more feminine and therefore lesser.

For many this will include challenging the idea that emotions are some kind of distraction in sensible decision-making (they’re not, they’re key, and we’re all motivated by them, even people who like to think of themselves as purely rational).

This International Men’s Day, lets both celebrate and learn from each other.

The success of our relationships – and the wider social change that will benefit us all – depend on it.

If you would like to join my waiting list for counselling (on your own or with a partner), or book a relationships after kids coaching call, you can contact me here.

We use cookies on our website to give you the most relevant experience by remembering your preferences and repeat visits. By clicking “Accept”, you consent to the use of ALL the cookies.
Cookie settingsACCEPT
Manage consent

Any cookies that may not be particularly necessary for the website to function and is used specifically to collect user personal data via analytics, ads, other embedded contents are termed as non-necessary cookies. It is mandatory to procure user consent prior to running these cookies on your website.